Growing up and living in Germany I heard the first time about tick-borne illnesses over 30 years ago, especially tick-borne encephalitis and Lyme disease. However, they seemed to be rare, so I never worried too much about them.

We live in Southern Alabama. My husband loves the outdoors. For 13 years, he worked as a ranger in a local wildlife refuge. Over the years, he had many tick bites. In 2015, one of the bites got infected. We noticed a red, ring-shaped rash forming combined with itching and swelling within 24 hours. About three or four days later he experienced chills, developed fever and complained about an aching body. It was obvious that he was dealing with some form of infection. He went to the doctor and was prescribed doxycycline (tetracycline) for two weeks, which is an antibiotic to treat early Lyme disease. We thought that we had caught it early enough and would be fine.

But about two years later he began feeling run down with low energy levels and getting easily exhausted. He continued working his daily pensum anyway. But the aching in his limbs came back, accompanied by cramps, twitching, and join pain. He developed irregular heartbeats, and twice even ended up driving himself from work to the ER fearing he was experiencing a heart attack. Sometimes his heart was beating so fast that it woke him up in the middle of the night. That was scary but on top of that, he had difficulties breathing due to seizures, and a feeling of tightness in his chest, and tingling in his arms. He got checked and his heart appeared to be healthy every time. Yet, the symptoms prevailed and got more intense with every repetition. As if this wasn’t scary enough yet, he started suffering from depression and anxiety. Late Lyme disease is known to affect the nervous system. The effect on his (and our) quality of life was undeniable. When I met my husband first, I said often how much I loved it that he made me feel so safe and calm at night because he would sleep like a baby. The Lyme disease caused awful insomnia. 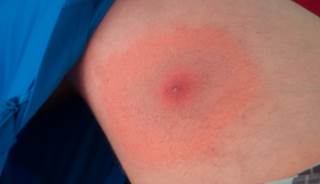 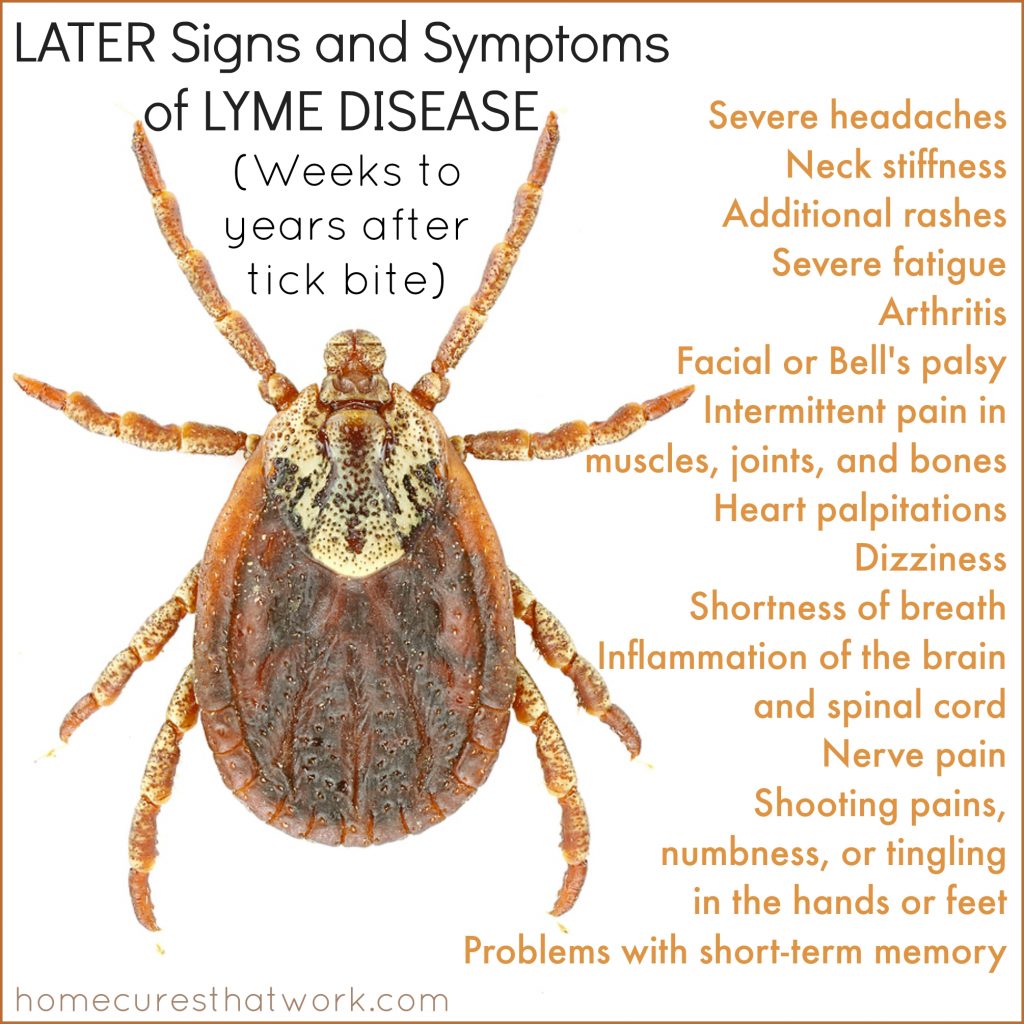 My husband’s story did not end here. He continued to work outdoors and had several tick bites again in 2017. We found a big deer tick on his lower belly, and a weeks later a smaller dark tick on his thigh. We were not sure if it was an American dog tick or a Lone Star tick, or a deer tick in seed tick state. He found more ticks on himself, but these two bites got infected. Both were itchy, swollen, and developed a red rash that lasted for over a week. About three weeks after the first tick bite, he started developing fever, chills, and started feeling achy again. Three or four days later he felt better, only to about one week later develop fevers and chills again. This time they were accompanied by extreme headaches, pain in his throat, difficulties swallowing even soft food, pain in his eyes and from behind his eyeballs. He felt fatigued, brain fogged. His short-term memory was pretty much zero. His muscles started cramping worse than usual, with added joint pain, twitching, cramps in his stomach, feelings of nausea, and shortness of breath. He described the headaches as the most debilitating of all the symptoms. At night he started sweating, changing t-shirts up to three times per night because they got dripping wet. He was running fevers for three and a half weeks in a row day and night. He described himself as feeling unplugged. My usually always active, always hard-working husband was laying on the sofa, hardly able to get simple things done. We were left guessing if he was suffering from late-symptom, Lyme related meningitis or had caught a new tick-borne encephalitis related to the acute fever. One more thing that really added to him feeling miserable was a drastic weight loss. Within one month he lost about 25 pounds. He is of slim stature and was trying to gain weight, which seemed impossible with the prolonged illness in his body and the intense sweating.

How Can These Conditions Be Treated?

My husband is a trooper. He hardly ever complains, until it gets really bad. We went to several doctors. Here in Southern Alabama, the first doctor we talked to wouldn’t even acknowledge that there is Lyme disease in this area. He even said that deer ticks would not be found in this area. Well, wrong! We got referred to a neurologist because of the depression and anxiety. Next, we went to another physician who asked almost in disbelief, if my husband would really experience all the symptoms stated at the time of the visit. He referred us to an infectious disease specialist. We had to wait for this appointment another five days. He started blood work but told us that the results would need two weeks to get back from the lab. Two more weeks – while every trustworthy source on the internet says that treatment needs to start as soon as possible in order to be successful and avoid chronic, long-term damage to heart, kidneys, and nervous system? Well, when we returned to the doctor’s office, we learned that he did not order the tests we had requested, such as besides checking for borreliosis to also test for Ehrlichiosis, Babebiosis, Borrelia miyamotoi disease, and Borrelia mayonii disease. Instead, the doctor ordered an HIV test for my husband, without asking for his consent or informing him about it. Needless to say that we felt this kind of treatment was awfully disrespectful.

However, once Lyme disease is diagnosed, allopathic doctors often prescribe two different antibiotics at the same time, trying to kill the borrelia bacteria at different stages of their life cycle within the body of the patient. These antibiotic treatments have to be taken for up to four months at pretty high doses. None of the doctors we went to gave any recommendation in this regard.

I was not willing to watch my husband suffer any longer and started a home-regimen with him. I would have him:

After about 7 days this regimen started kicking in. The fevers ceased. So did the night sweats, chills, body aches, nausea, and throat pain.

Teasel tincture had the most noticeable effect on reducing cramps and nausea, and Reiki in combination with the Biomat was the most effective treatment to help manage pain.

Ticks Species and Diseases They Carry

Here in Alabama four tick species are endemic: American dog ticks, blacklegged ticks (also known as deer ticks), Lone Star ticks and brown dog ticks. Different kinds of ticks carry different diseases. The brown dog tick mainly carries infections that affect dogs, but lone star ticks carry tularemia and Lyme disease. The American dog tick carries Rocky Mountain spotted fever and tularemia, and the blacklegged ticks are the primary carriers of Lyme disease and also carry human granulocytic Ehrlichiosis. Since the different kinds of ticks are very hard to identify at different stages, all ticks should be considered potential dangers. Tick bites may further cause anaplasmosis, babesiosis, rickettsiosis, Southern tick-associated rash illness, and heartland virus. You may think, “I’ve never heard of any of these diseases before. They can’t be that common.” Think again! Cases of tickborne illnesses have been increasing in many states. Reports of tick-borne Lyme disease, a problem in the northern tier of states, have increased by more than 100 percent in the past 10 years, making it the most common vector-borne disease in the U.S. (far more common than mosquito-borne diseases, by the way). Reports of Rocky Mountain spotted tick fever, now common in Alabama, have increased 5-fold during the same time span. Lyme disease is a bacterial infection caused by the bacterium Borrelia burgdorferi. Sometimes symptoms show up 24 to 72 hours after the bite, but it is also possible that symptoms show up weeks or even months later.

The Centers for Disease Control (CDC) has a map on their website showing a low risk of Lyme disease for most of Alabama and no or minimal risk in some far north areas. That really surprised me since everyone I talked to seemed to know someone who had tested positive for Lyme disease.

The blood test for Lyme disease will not work for several weeks after the infection starts! Do not wait that long – let your doctor know if you have symptoms and have been bitten by a tick.

Do not let your symptoms go untreated — the sooner you get treatment the better your chances are for healing. Left untreated, Lyme disease could cause serious chronic health problems.

For more information on tick species in the Southern states of the USA look here: http://schoolipm.tamu.edu/2016/07/14/ticks-to-look-out-for-by-southern-states/