We are more than our limbs, bones and organs, our brain and mind, our senses and emotions.

We are manifested vibrations.

And therefore we are able to connect to the Universal Life Source through:

What am I talking about?

When talking about the Universal Life Source, I refer to what the ancient scriptures call qi or chi in Chinese, prana in Vedic, and ki in Japanese scriptures. In the West we know it as the breath of life. It is nothing less but what breathes life into every living being and turns a corpse into a living body and a piece of wood into a thriving tree.

In my practice I use a variety of energy healing modalities with reiki, crystal reiki, and breath work being my favorite ones. Reiki is practiced by channeling universal life force energy through the hands into the body of the recipient. The recipient stays fully clothed during treatment. However, the flow of energy generates a state of deep relaxation. It measurably calms the mind. Beyond that reiki releases energetic blocks in tense muscles and inner organs, blocked chakras and fatigued glands.

By measurably calming the mind I refer to changes in our brain waves upon receiving reiki. Our daytime brain activity is described by beta waves. Daytime activity can be anything from just being awake to deep thinking to responding to stress. During a reiki session both the brain waves of the practitioner as well as the brain waves of the recipient synchronize in an alpha brain wave state. This phenomenon is known as brainwave entrainment. Another example is brainwave entrainment induced through binaural beats (music) during meditation.

I like to combine reiki sessions with guided yoga nidra or hypnotic trances. These added modalities deepen the level of relaxation so that theta brain waves can be measured. Theta waves occur during sleep and dreaming. However, when experienced during a reiki session this is the state when clients report that they feel like floating. They experience their body as weightless. It is a state when the body falls asleep while the mind stays aware of what is going on. During this state healing is promoted, especially healing from emotional wounds, past and acute trauma, and limiting beliefs. On a physical level the immune system is being strengthened, (chronic) pain is reduced, sleep quality improves, and it’s easier to let go of eating disorders.

How exactly is this possible?

Physicists long ago determined that electromagnetism—which is responsible for interactions between charged particles—is one of the key forces in the universe.

The Earth has its own magnetic fields, produced primarily by fluxes in the molten metal in the outer core of the planet but also by magnetized rocks, Schumann resonances, solar flares, tectonic plate movements, telluric currents, and cosmic radiation. The main purpose of this field is to protect the planet from solar winds, which would otherwise destroy the protective ozone layer in our atmosphere. The magnetic fields from various sources cover the entire planet and support the function of all life.

Along with Earth’s basic DC field, the Schumann resonances are considered “earth-based frequencies.” They are a set of distinct frequencies in the extremely low frequency portion of the Earth’s electromagnetic spectrum, between about 3Hz and 60Hz. The most distinct peak at 7.83 Hz, and other obvious peaks at 14.3, 20.8, 27.3, and 33.8 Hz.

Read more about Schumann resonances and how the Earth’s magnetic field correlates with all life here: https://www.heartmath.org/research/global-coherence/

Regeneration is an essential cellular function. The body heals itself in many ways such as in response to a disease, a wound, or abnormal growth of tissue. Given supportive circumstances, the body restores itself. Regeneration, thus healing, is grossly based on cellular communication, which cannot take place without (electrical) energy being exchanged between the cells.

Now, how does all this relate to reiki healing?

You may have heard of the use of PEMF (pulsed electromagnetic fields) in physiotherapy. PEMF devices are often used by chiropractors or physical therapists to stimulate regeneration of tissue. Bones, muscles tissue, skin, individual inner organs – they all respond to a specific frequency. And this is where it gets really interesting: the frequencies used for healing correlate with the Schumann resonances. On top of that, during two separate studies on reiki were conducted in 1990 by Dr. John Zimmermann (USA) and in 1992 by Dr. Seto (Japan). These studies found that during a reiki session not only the brains of the practitioner and the recipient entrain in an alpha state but they pulse in unison with the Earth’s magnetic field at 7.83 Hz. During a session the biomagnetic field of the practitioner’s hands is at least 1000 times greater than normal which could be for the first time measured using SQUID devices.

And there is even more to it. The studies found further that the pulses emitted through the practitioners’ hands have the same frequencies as brain waves, and as the practitioner moves  his/her hands over the body of the recipient, the frequencies change from 0.3 – 30 Hz. Coming back to PEMF devices used by doctors, it is known that specific frequencies are suitable for different tissues. For example, 2 Hz encourages nerve regeneration, 7Hz bone growth, 10Hz ligament mending, and 15 Hz capillary formation.  Also, it has been known for many years that placing an electrical coil around a fracture that refuses to mend will stimulate bone growth and repair. 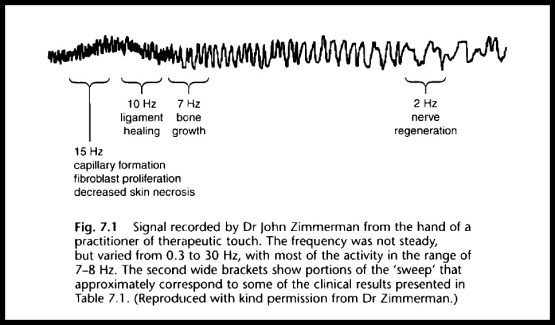 Dr. Becker, a research colleague of Dr. Zimmermann, explains that ‘brain waves’ are not confined to the brain but travel throughout the body via the perineural system. Our perineural system consists of the sheaths of connective tissue surrounding all nerves. During treatment, these waves begin as relatively weak pulses in the thalamus of the practitioner’s brain, and gather cumulative strength as they flow to the peripheral nerves of the body including the hands. The same effect is mirrored in the person receiving treatment, and Becker suggests that it is this system more than any other, that regulates injury repair and system rebalance. While it is important to note that reiki does not impose a set of cultural or religious beliefs, it is interesting that the ancient teachings about the chakra system, and in particular our third eye, relate to the stimulation of the thalamus while calming the brain down and connecting to the “universal life energy field’.